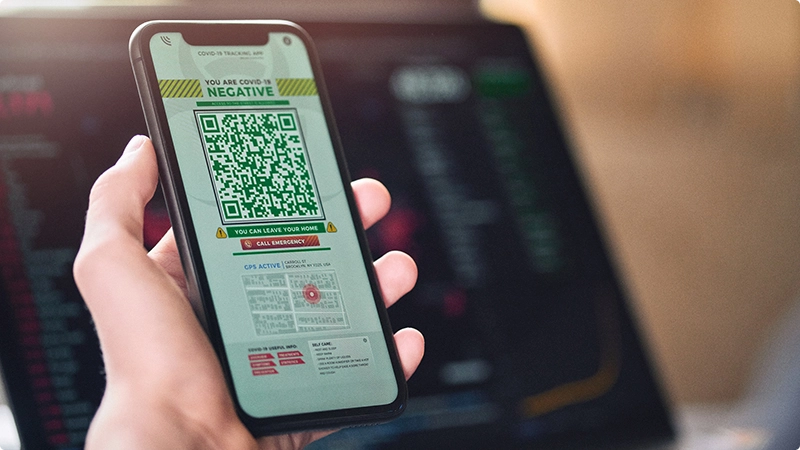 The British government has contracted two firms to develop COIVD ‘freedom passports’, that would be used to segregate society between those who have been tested or vaccinated against COVID and those who have not.

While the government is still saying that it will not introduce such a system, the firms have been given instructions to develop an app based system to integrate a QR code linking to a digital passport.

The QR code would be used to gain entry into pubs, clubs, venues, cinemas, basically anywhere in public.

“After scanning in the code, the venue could refuse entry to those without a recent negative result,” the Daily Mail notes.

The site shows that in November a £42,000 contract was awarded to a company called Netcompany UK to develop a ‘Covid-19 Certification/Passport MVP’ (minimum viable product’).

Another contract for £34,000 was awarded to Hub Company to develop an app that would include a personal QR code for COVID tests.

“It is about looking at ways we could use this in future,’ a Deprtment of Health source claimed, adding “It is looking at whether it would be possible.”

“There are no plans to introduce immunity passports,” the source also claimed, echoing previous government assurances.

We previously reported, back in November, on the government’s active plans to develop a QR code system to use as an ‘immunity passport’.

The report, stemming from sources close to the government, noted that “Those who refuse to get the Covid-19 jab would likely be refused entry to venues, as part of the same proposals.”

Other reports have suggested that an app already used prominently in the UK by people to book doctor and hospital appointments could implement a vaccination status section that will show whether a person has taken the coronavirus jab or not, and that businesses may use it to refuse entry to those who have not.

Government officials have previously signalled that the system could be integrated with the much maligned NHS ‘track and trace’ app.

Health Secretary Matt Hancock, who has repeatedly refused to rule out making vaccination mandatory for all UK citizens, previously announced that ‘immunity passports’ could be rolled out for those who have antibodies against the virus, allowing them to participate in society.

The system would be similar in nature to that being considered by Ticketmaster, who it was revealed are considering making customers prove they’ve had the vaccine or a negative coronavirus test before allowing them to purchase tickets.

Ticketmaster later clarified that a final decision on such measures would be up to event organizers but that they were still mulling over the implementation of the system.

Last week, Israel announced that citizens who get the COVID-19 vaccine will be given ‘green passports’ that will enable them to attend venues and eat at restaurants.

A litany of other government and travel industry figures in both the US, Britain and beyond have suggested that ‘COVID passports’ are coming in order for ‘life to get back to normal’.

Sam Grant, campaign manager at the civili liberties advocacy group Liberty has warned that “any form of immunity passport risks creating a two-tier system in which some of us have access to freedoms and support while others are shut out.”

“These systems could result in people who don’t have immunity potentially being blocked from essential public services, work or housing – with the most marginalised among us hardest hit,” Grant further warned.