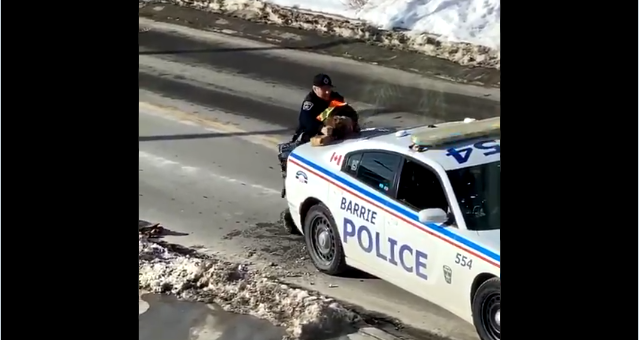 The mayor and police in Barrie say they will investigate the arrest of a man on a downtown street caught on video.

In the video, the officer is seen struggling with the man on the ground, and holds what appears to be a stun gun to his shoulder, threatening to “light (him) up.”

The officer then hits the man on the head with the bright yellow device.

The cellphone video, shot by a bystander, ends after a second police officer arrives and helps flip the man on his stomach to be handcuffed.

Video of the incident that has circulated on social media can be found here.

A different angle of the arrest shows a police officer holding the man up against a police vehicle.

Barrie police say the arrest of the 20-year-old Barrie man occurred on Thursday around 3 p.m. on Dunlop Street East. Police say he is facing a charge of cause disturbance and assault with attempt to resist arrest.

The officer involved in the arrest has been reassigned pending the results of the investigation.

“The images captured in the video are concerning to both the public and myself,” Chief Greenwood said in a release.

Mayor Jeff Lehman tweeted on Thursday night he had seen the video, which was posted on social media, and that it will be investigated.

Lehman says there will be full accountability.