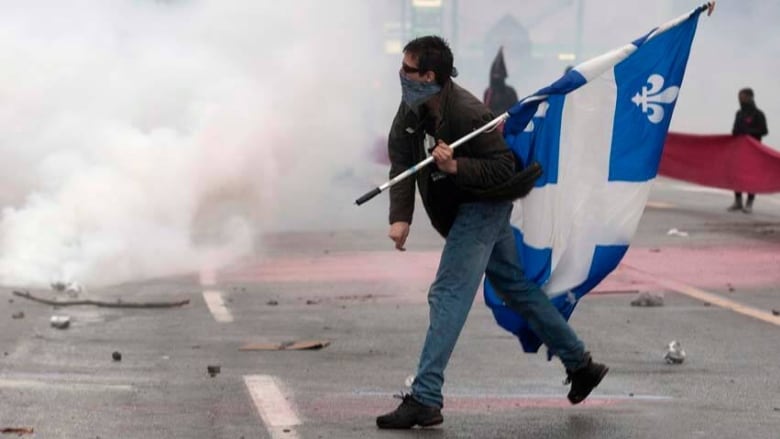 A Quebec superior court judge has reaffirmed the right to protest in the streets in a ruling issued on Thursday.

Justice Guy Cournoyer acquitted a protester who was fined under Quebec's Highway Safety Code during an anti-police brutality march in 2011.

Police arrested 239 people during that protest, and about 150 of them were charged under section 500.1 of the code, which prohibits anyone from using a vehicle or other obstacle to block a highway "during a concerted action intended to obstruct in any way vehicular traffic."

The protesters argued that law was adopted to prevent people from blockading roads with vehicles and was never intended to put a stop to demonstrations.

Cournoyer agreed, ruling that applying article 500.1 of the code to break up protests violates both the Quebec and Canadian charters of rights and freedoms.

Julien Villeneuve, a professor at Collège de Maisonneuve, told CBC Montreal's Daybreak that the ruling is a victory for the people.

Villeneuve, better known as Anarchopanda from the Quebec 2012 student protests, said it will make a difference for the hundreds who were charged under the code.

"It means another judge agrees with us that in a free and democratic society that it is not up to police to decide who gets to use the roads or protest," said Villeneuve.

The judge has given the Quebec government six months to amend the code.

This could mean the end of political profiling of demonstrators in Quebec and create a safe space for protests, said Villeneuve.