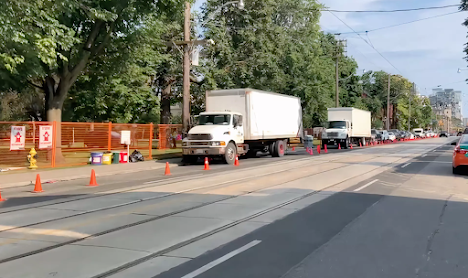 A Toronto park that was the sites of one of this week's controversial tent encampment evictions is now the setting for a film production, and residents rightfully have some questions.

Toronto police, private security guards and city staffers moved into Alexandra Park at Dundas and Bathurst on Tuesday morning to enforce trespass notices given to the 30-or-so people living among 60+ makeshift structures in the public green space.

It is one of a handful of parks identified by the city as priority for its efforts to move people experiencing homelessness — who increasingly turned to outdoor living amid the pandemic — into more safe and sustainable housing with meals, mental health help and other supports.

But after what was a fairly peaceful eviction of the Alexandra encampment earlier this week (at least, when compared to yesterday's ordeal at the Lamport Stadium encampment or last month's action in Trinity Bellwoods), it seems that the now-fenced-off park has now been taken over not by cops and city officials, but by film crews.

People have been raising questions about the potential connection between the evictions and the expensive shoot for FX's new TV series Y: The Last Man, which is taking place in the park's community centre.

Though filming permits were issued in advance of the clearings, some are speculating about whether the U.S. production company had requested that homeless residents be removed for the sake of the show.

"What luck for the film company that the place was suddenly made 'safe,'" one resident wrote on Twitter.

"A big coincidence, I am sure. Just like the encampment removal/film shoot coincidence under the Gardiner earlier in the year..." another added, referencing the fake encampment installed under the highway for a film production last month in the place of real homeless communities that had lived there.

"Neither the film office nor the production had any knowledge of the City’s enforcement of the trespass notice at Alexandra Park this week, nor did the City's decision to enforce the trespass notice on Tuesday have anything to do with the film shoot," a Toronto spokesperson told CityNews on Thursday.

"Staff involved in planning and enforcing the trespass notice had no knowledge of the film shoot or permit. In other words, neither was aware of the other."

The permits for the shoot at Scadding Court Community Centre were issued July 15, they added, while film crews had been in the area all week preparing.

The location manager for Y told the news outlet that the timing was "accidental," though acknowledged it doesn't look good.

As in the case in Trinity Bellwoods, the metal fencing and private security will remain in the park as the city restores it for wider public use, including for kids' summer camps.