Liberal and NDP officials mull over a potential deal 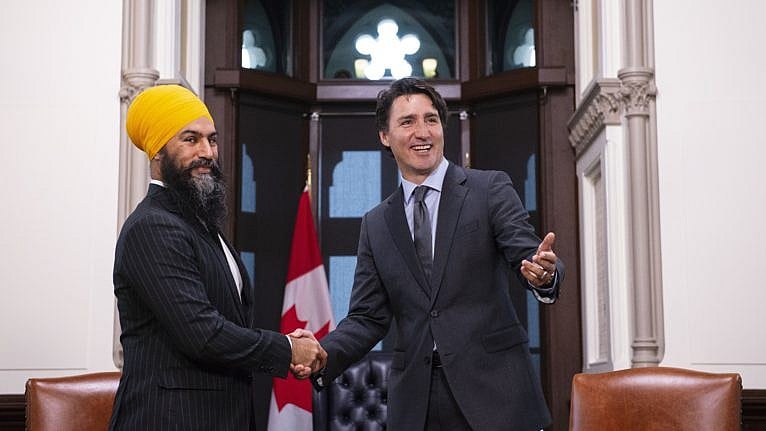 Following a meeting between Singh and Trudeau, officials in both parties have considered a deal to avoid a lost confidence vote for three years.

Senior Liberals and New Democrats are kicking around the idea of reaching a deal that would allow the government to go three years without falling on a confidence vote.

Justin Trudeau and Jagmeet Singh met secretly to discuss the parliamentary session ahead. Officials would not say that they discussed a deal that would see the NDP agree ahead of time to support the government through three budgets, but sources say the idea is being discussed at senior levels inside both parties, although there have been no negotiations.

The idea is not to establish a coalition—with NDP ministers in cabinet—but a deal like the one reached in Ontario in 1985, when then-NDP-leader Bob Rae agreed to vote with Liberals under David Peterson while they worked on an agreed-on agenda for two years. Some people in both parties say such a deal—this one for three years—could remove the regular pressure of confidence votes and allow the parties to work on shared priorities.

There is likely, though, to be pressure within both parties to reject such an arrangement, which would pose political risks for both sides. One complicating issue is the Liberals’ decision, which they announced late Friday, that they intend to appeal a Canadian Human Rights Tribunal order to compensate Indigenous children who were mistreated by the child welfare system, but also to suspend litigation and try to negotiate a resolution.

The political fallout from that announcement, which is happening as I write, could have an impact on the possibility of a supply deal between the two parties.

A senior NDP source, speaking before that decision was released, said the NDP was pushing for the Liberals to let the decision stand. A senior Liberal source confirmed that Singh and Trudeau discussed it at their meeting, and that Singh was pressing for a resolution.

The NDP official, who spoke on condition that they not be identified, said Trudeau and Singh did not actually discuss a potential agreement, but said New Democrats are discussing the possibility internally.

A Liberal source, speaking under the same terms, said the Liberals are also pondering the possibility.

A government official, speaking on condition that their name not be used, said there is no deal, but the Prime Minister is seeking ways to make Parliament work.“There’s no agreement of that nature to do anything like that beyond the PM generally wanting to make Parliament a productive place and wanting to find, early on, to identify areas of common ground, and of course the NDP because there’s a lot that we agree on.”

One downside for Singh would be that he would not necessarily be able to attack Trudeau as often as he did during the September election campaign in the next campaign if the Liberals have been relying for his party for votes for three years. NDPers can point to the bitter recent experience of the British Liberal Democrats, who suffered at the ballot box after forming a coalition government with the Conservatives.

But NDP supporters of an agreement could point to the successful experience of Rae’s New Democrats in Ontario, which ended with Rae becoming premier in a later election.

MPs in all parties would be relieved, though, to be able to focus on parliamentary work without the regular possibility of confidence votes bringing about a snap election, what Rae referred to as the “day-to-day blackmail bulls–t.”