The "elites" are laughing in our faces 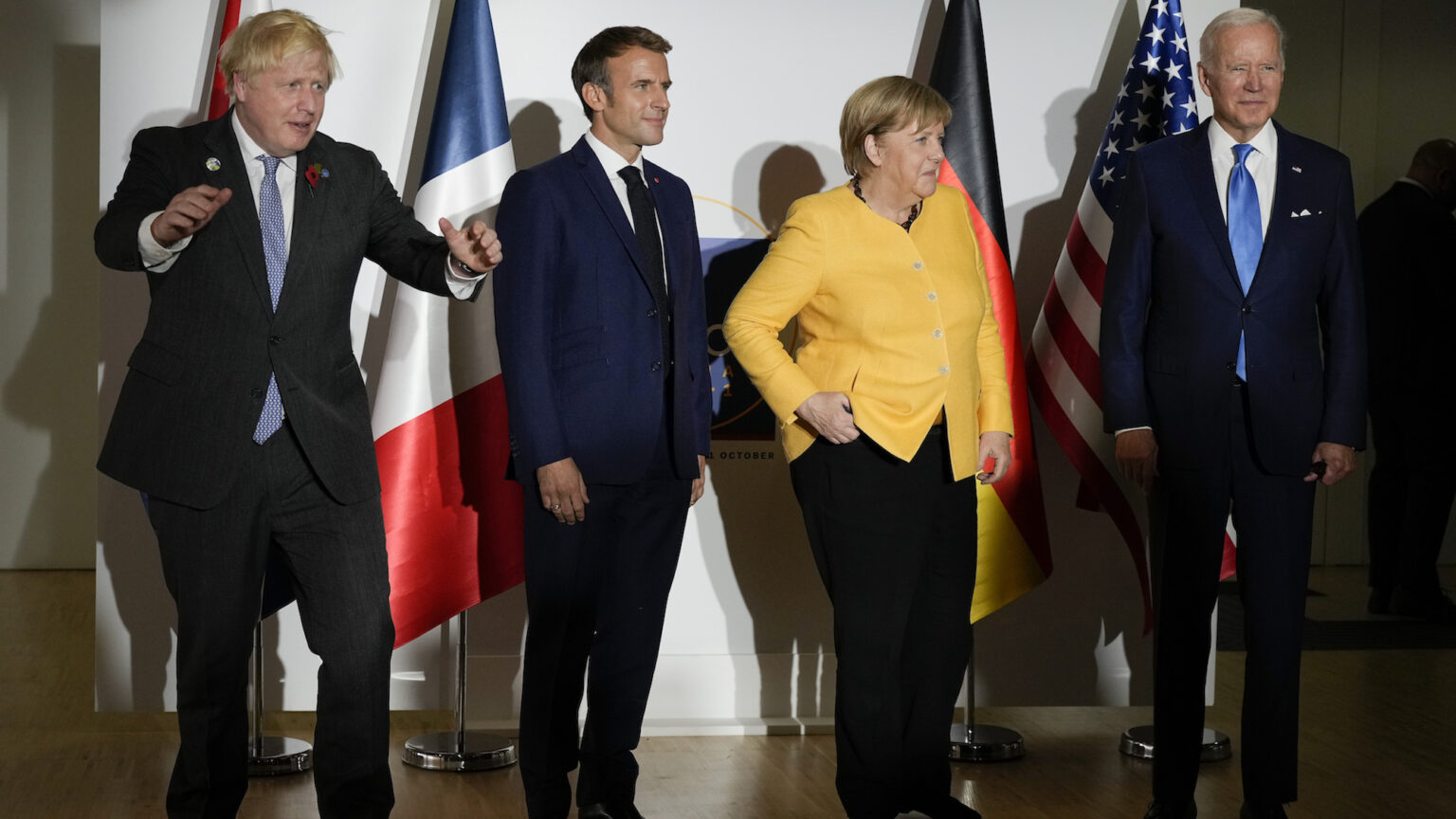 The rich, the powerful and the full of puffed-up virtue will gather in Glasgow to pontificate to the rest of us about how much we are harming the planet with all our waste and hubris. They’ll arrive in their private jets to bemoan the scourge of air-industry emissions. They’ll tuck in to five-star meals in between wondering out loud if the little people should eat less meat. They’ll rest their weary, virtuous heads on plump, silk pillows after long days of discussing how to rein in the material aspirations of the masses. It promises to be one of most nauseating displays of oligarchical conceit of recent times.

It feels like the elites are just laughing in our faces now. So the other day we had the UK’s chief scientific adviser, Patrick Vallance, saying everyone will have to eat less meat and fly less if we are going to get a handle on this climate-change thing. A little later it was reported that around 400 private jets will fly into COP26, carrying world leaders and big-business execs to the plush surrounds in which they’ll wring their manicured hands over mankind’s carbon crimes. Ordinary people are guilt-tripped for taking one poxy flight a year to escape the trials and vagaries of life in capitalist society for a couple of weeks, while those who quaff champagne on airplanes that it costs $10,000 an hour to hire out get to pose as hyper-aware defenders of poor Mother Nature.

According to one report, the private jets landing in Glasgow will spew out around 13,000 tonnes of carbon. That’s the same amount of CO2 that 1,600 Scots get through in a year. ‘Get tae fuck’ will be a perfectly reasonable response to these wealthy jet-setters telling Scots, or anyone else for that matter, to fly less, drive less and eat less. John Kerry, Joe Biden’s climate envoy, will be in Glasgow to pull pained faces for the cameras over the possible heat death of the planet. Three months ago he flew in a private jet to Martha’s Vineyard for Barack Obama’s lavish 60th-birthday celebrations. It was the 16th private-jet jaunt his family had taken this year. Prince Charles, from one of his palaces, says COP26 is the ‘last-chance saloon’ for the planet. The royal family has collectively flown enough air miles over the past five years to get to the Moon and back. And then around the Earth’s equator three times. In short: 545,161 miles. Reader, they’re taking the piss.

Then there’s all the cars. Driving is viewed by greens, and by eco-virtuous political leaders like Sadiq Khan, as one of the stupidest, most Gaia-destroying activities indulged in by the plebs. The Home Counties irritants of Insulate Britain have been winning plaudits from the commentariat over the past few weeks for blocking the paths of such terrible eco-criminals as mums driving their kids to school and deliverymen trying to deliver food and other essentials. And yet there’s Joe Biden in Rome for the G20 being whisked around in an 85-car convoy. His own armoured limousine, and its decoy version, generates 8.75 pounds of carbon per mile driven – 10 times more than normal cars. And greens want us to feel angry about the working-class bloke driving an HGV full of groceries and fuel? It’s insane.

When he’s done with Rome, Biden will fly to Glasgow in Air Force One. Four jets will accompany him. Combined, they’ll emit an estimated 2.16million pounds of carbon over five days. This is getting ridiculous. People will be perfectly within their rights over the next few days to ask why it is that those who live in the lap of luxury, who jet to every corner of the globe, who experience more luxury in a week than most of us can expect in a decade, should get to hold forth on humanity’s alleged suffocation of the planet with carbon and pollution. Like Joanna Lumley, famed, well-paid traveller of the planet, saying travel should be rationed. Or Dame Emma Thompson literally flying first-class from LA to London to take part in an Extinction Rebellion protest about the evils of CO2. Or Harry and Meghan attending a concert focusing on the ‘urgent need’ for climate action and then leaving on a private jet. What the green oligarchy lacks in moral consistency it more than makes up for with brass neck.

Here’s the thing, though – it’s always been like this. For years now, it has been clear that the environmentalist movement is fundamentally a wealthy man’s game, made up of people who live luxurious lives bemoaning the destructive habits of the masses. Who can forget when David de Rothschild – yep, he’s from the banking family – wrote the Global Warming Survival Handbook that contained wonderful nuggets of advice like ‘Wear a jumper’ (so you can turn off the heating in your home) and ‘Grow your own tomatoes’ (so you can shop less)? Or when George Monbiot – Stowe, Brasenose College, descendant of cake-and-tea millionaires – chirped that environmentalism is a ‘campaign not for abundance but for austerity’? Or when the plummy activists of Plane Stupid called for a ban on cheap flights because all they do is allow oiks to jet off to ‘Eastern European destinations chosen not for their architecture or culture but because people can fly there for 99p and get loaded for a tenner’?

It’s been clear for years now that the green movement is a neo-aristocracy that draws its loudest voices from the old aristocracy and also from the middle-class managerial elites and the new technocratic establishment. This is a movement that allows the descendants of incredibly wealthy banking families to tell the rest of us to wear a cardie rather than turn on the central heating and which invites literal princes to make sad faces about all the flying and meat-eating the oiks are engaging in. I said it was a modern version of Versailles, but actually it’s worse than that. At least daft bint Marie Antoinette wanted the lower orders to eat cake (she just didn’t realise they didn’t have any). This new lot actively campaigns against the consumption of the 21st-century equivalent of cake – meat, heat, easy travel. ‘Don’t let them eat cake’ is the cry of the eco-aristocrat.

The issue here is not the hypocrisy, though that no doubt abounds. It’s the fact that environmentalism is now the core ideology of the new ruling class. The greening of the elites has been one of the most extraordinary developments of the past two decades. Across the West, green thinking has been embraced by virtually every wing of the establishment, from the political elites to the media class, from the educational realm to the world of popular culture.

And it isn’t hard to see why. It’s the perfect ideology for our at-sea elites. It allows them to magic up a sense of urgent moral purpose – they’re saving the planet, no less! It lends itself beautifully, or, rather, terrifyingly, to the project of social engineering: lower your horizons, learn to live with less, reconceive of yourself as a destructive creature in need of top-down control rather than a creative being who might help to push humanity forward. It naturalises the limitations of capitalism, encouraging people to make their peace with austerity and downturn on the basis that economic growth is a bad, nature-exploiting idea. And it is a very difficult ideology to challenge. The marshalling of The Science to buoy up this ruling-class ideology means that anyone who questions it – anyone who demands more growth, more ambition, a bigger human footprint – can swiftly be written off as an anti-scientific scourge, as a ‘denier’ of the revealed truths of climatology. Its social engineering, its social control and its strict, censorious management of social aspirations are what make the green ideology so attractive to the new elites.

COP26 will help to consolidate this neo-aristocracy. And, bizarrely, the left will cheer it on. The left once said: ‘We do not preach a gospel of want and scarcity, but of abundance… We do not call for a limitation of births, for penurious thrift, and self-denial. We call for a great production that will supply all, and more than all the people can consume.’ (Sylvia Pankhurst.) Now it pleads with the super-rich to come up with more and more creative ideas for how to rein in the filthy habits and material dreams of the masses. What a disaster. It isn’t climate change that poses the largest threat to humanity in the early 21st century. It’s the bourgeoisie’s loss of faith in its historic project, and its arrogant generalisation of that loss of faith into a new ‘green’ ideology we must all bow down before. A revolt against environmentalism is arguably the most necessary cause of our age. Who’s in?