55 Dead After Truck Smuggling Migrants Headed To US Border Crashes 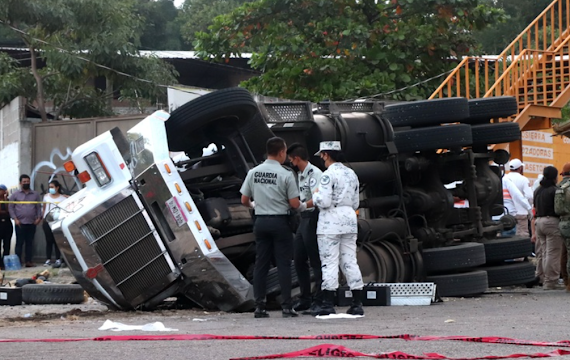 A tractor-trailer smuggling more than 200 migrants headed to the United States crashed into a pedestrian bridge in southern Mexico on Thursday, injuring at least 50 and killing 55, according to the Associated Press.

Most of the migrants were Guatemalan or Honduran. Authorities said migrants from Ecuador, the Dominican Republic, and Mexico were on board as well. Some who survived fled to avoid arrest. Others who remained said they were headed to the United States and boarded the truck just over the Guatemalan border, paying between $2,500 and $3,500 for safe passage to Puebla. From there, it was assumed they would pay another smuggler for a ride to the U.S. border.

Illegal border crossings into the United States hit an all-time high in 2021, with more than 1.7 million migrant arrests on the southern border. From 2013 to 2019, border arrests averaged about 540,000 annually.

The migrants who have flooded the southern border during President Joe Biden's first year in office have expressed confidence the United States would accept them. During his presidential campaign, Biden called for a 100-day moratorium on deportations and the end of the Trump administration's "Remain in Mexico" policy, which requires illegal immigrants to wait for their U.S. court hearing in Mexico after being apprehended.

According to the New York Times, one migrant in March who was apprehended and returned to Mexico was overheard telling a relative over the phone: "Biden promised us!"

So many migrants were packed inside the cargo truck that it took rescuers considerable time to separate the living from the dead. Mexican authorities said the heavy load may have contributed to the crash. The accident occurred outside of Tuxtla Gutiérrez in Chiapas, Mexico, which borders Guatemala.

Vice President Kamala Harris visited Guatemala in June in an attempt to warn migrants against coming to the United States.

"Do not come," Harris said during a joint press conference with Guatemalan president Alejandro Giammattei. "Do not come. The United States will continue to enforce our laws and secure our borders."

Deportations of illegal immigrants have plummeted on Biden's watch. In the first six months of the Biden administration, deportations dropped by 90 percent when compared with the same time period in 2019.