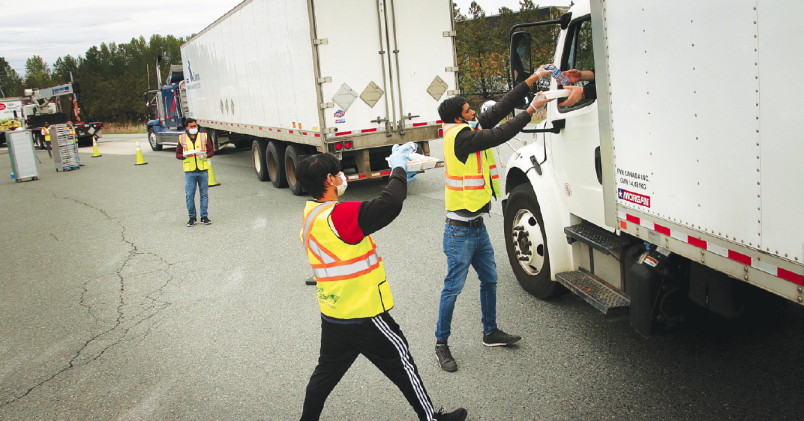 A vaccination grace period that has existed for border-crossing truckers, under an essential service exemption, ends Jan. 15.

Surrey Board of Trade CEO Anita Huberman says it’s time for truckers to get vaccinated ahead of a looming deadline that will mandate COVID-19 vaccines on all U.S. border crossers.

“Truckers, from our perspective, must get vaccinated unless they can't due to a medical condition. This is the only way we will keep each other and ourselves safe and move beyond the pandemic. Yes, it is true that if 10% of the truckers don't meet the vaccine mandate requirements that it would further compromise our supply chain issues that our economy is facing,” Huberman tells Glacier Media.

On Friday, industry group Canadian Manufacturers & Exporters (CME) called on both the Canadian and United States governments to delay the vaccine mandate, which is scheduled for Jan. 15. As it stands now, truckers are considered exempt from proof of vaccination as an essential service, unlike regular border commuters who require such proof.

The CME cited the Canadian Trucking Alliance, which estimates a vaccine mandate would sideline 10% to 20% of their workers from cross-border trips.

"Manufacturers are strong supporters of vaccinating all American and Canadian citizens, and that includes truckers. However, a vaccine mandate for truckers, at this time, will sideline one fifth of that workforce, make the trucking labour shortage go from bad to worse, and do severe damage to already struggling supply chains. CME urges the Canadian and U.S. government to hit the pause button before it is too late," said Dennis Darby, president and CEO of CME, in a statement.

The Canadian government announced the mandate on Nov. 30 but CME believes it may need two more months. The organization is asking for pop-up vaccination clinics at borders and for a testing regiment for unvaccinated truckers.

Huberman, who represents businesses in a major trucking hub, offers one solution to the mandate.

“Work with private colleges to train/source truckers to fill this gap,” she says.

Dave Earle, president of the British Columbia Trucking Association, says it can take four months to train a new trucker, if they can be found.

And, said Darby, “Canadian manufacturing is already struggling with labour shortages and massive supply chain disruptions. Reducing North America's cross-border trucking workforce by almost one fifth will do a lot of damage to our sector at a time when we can least afford it.”

With up to 20% of truckers unvaccinated, the workforce over-represents the broader Canadian working age population that is unvaccinated (14%). The Alliance did not respond to an inquiry as to why that is. In B.C., 90% of adults are fully vaccinated.

Earle says he’s not certain truckers are below vaccination rates of the general population. Some members have workforces at over 90% whereas others he knows of are in the 60% range.

Earle questions the potential economic harm as it is weighed against risks.

“We know drivers are not vectors of transmission. There’s very limited interaction; they drive alone; they work alone,” says Earle, claiming studies of drivers have shown infection rates as low as 0.1%.

As of Nov. 30, all exempt essential service providers, including truckers, have been required to identify their vaccination status online via ArriveCAN, regardless of whether or not they are allowed to cross as unvaccinated.

Glacier Media asked Canada Border Services Agency about the rate of passage by unvaccinated individuals, including truckers; however, the agency could not respond by time of publication. The Public Health Agency of Canada also could not answer that question. So, it’s unclear what the exact nature of the looming problem may be.