Reshaping previous ideas on the story of civilisation, Gobekli Tepe in Turkey was built by a prehistoric people 6,000 years before Stonehenge. 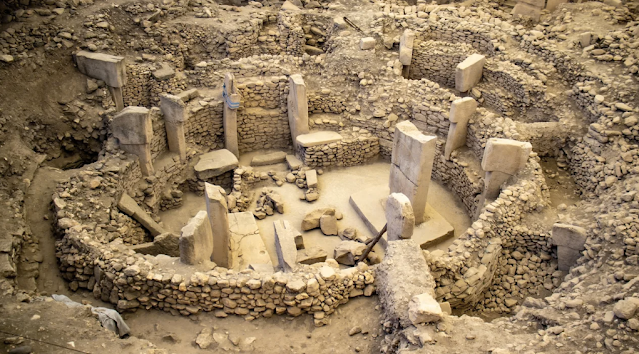 When German archaeologist Klaus Schmidt first began excavating on a Turkish mountaintop 25 years ago, he was convinced the buildings he uncovered were unusual, even unique.

Atop a limestone plateau near Urfa called Gobekli Tepe, Turkish for "Belly Hill", Schmidt discovered more than 20 circular stone enclosures. The largest was 20m across, a circle of stone with two elaborately carved pillars 5.5m tall at its centre. The carved stone pillars – eerie, stylised human figures with folded hands and fox-pelt belts – weighed up to 10 tons. Carving and erecting them must have been a tremendous technical challenge for people who hadn't yet domesticated animals or invented pottery, let alone metal tools. The structures were 11,000 years old, or more, making them humanity's oldest known monumental structures, built not for shelter but for some other purpose.