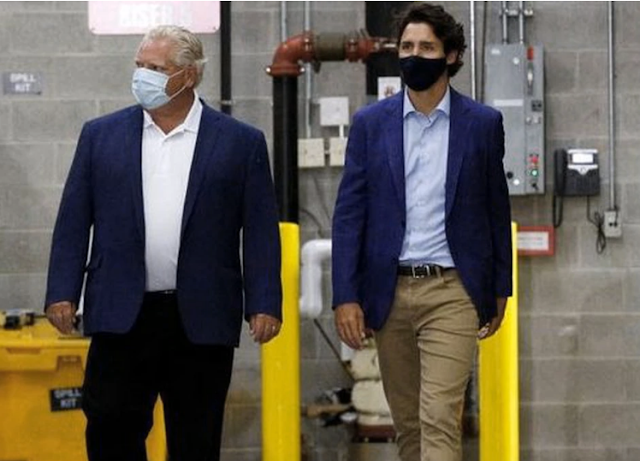 The unseemly rush by governments to vilify Canadians refusing to be vaccinated as the root of all evil ignores the fact government actions throughout the pandemic have contributed to vaccine hesitancy.

To begin with, it is a myth to claim everyone who refuses to be vaccinated is irresponsible, reckless, racist, misogynist, throws stones at the prime minister or demonstrates outside hospitals.

As Abacus Data pollster Bruce Anderson wrote in Maclean’s in August after surveying 30,000 adult Canadians on their attitudes toward vaccines, the “typical ‘vaccine hesitant’ person is a 42-year-old woman who votes Liberal.”

Anderson estimated 2.1 million people — 7% of adult Canadians — were hesitant to be vaccinated, as opposed to an equal number who refuse to be vaccinated and will not change their minds no matter what.

“The hesitant are not conspiracy theorists,” Anderson wrote.

“They aren’t angry at the world. They don’t think COVID-19 is a hoax. They aren’t radicals of the left or the right — 61% of them say they are on the centre of the spectrum. Two-thirds have post-secondary education.

“However, compared to the vaccinated, they don’t have a lot of trust in government. They also try to avoid prescriptions, dislike putting anything unnatural in their bodies and 83% say they are reluctant to take any vaccines. Most worry that COVID-19 vaccines haven’t really been tested for a long time.”

Given those findings, let’s examine how government actions during the pandemic have undoubtedly contributed to vaccine hesitancy.

With the Trudeau government now decreeing workers who lose their jobs because of vaccine mandates will not be eligible for employment insurance — even if they had agreed to be tested every day — the vaccine hesitant have every right to feel betrayed.

Then there is the issue of how governments changed their positions on pandemic protocols, often almost overnight, with little or no explanation for the reasons.

True, some of this occurred because medical understanding of COVID-19 changed over time.

But when the Public Health Agency of Canada originally claimed mask wearing could be less safe than not wearing them before reversing itself, we now know PHAC took that position amid a severe shortage of masks, because the federal and provincial governments had failed to maintain adequate stockpiles of personal protection equipment despite a decade of official warnings to do so.

We also know while the federal government publicly insisted for months that restricting air travel, imposing border controls and mandatory quarantines wouldn’t control the spread of COVID-19 — before reversing itself on these issues — federal officials were privately advising the government it didn’t have the resources to enforce mandatory quarantines and similar measures.

Failing to be open, honest and transparent with the public has obviously contributed to vaccine hesitancy.

Decisions by the Ford government in Ontario to allow big box stores to remain open to in-person shopping while denying this to small businesses, and later allowing increased capacity limits for Scotiabank Arena and Rogers Centre — including eating and drinking during games — while continuing to enforce social distancing requirements for restaurants reinforced the belief big business was calling the shots with the government.

Ontario’s ill-advised decision to allow police to question anyone about where they were going to determine if they had a legitimate reason for being outside — hastily withdrawn after police forces said they wouldn’t enforce it — fed into the belief of those already suspicious of governments that they were using the pandemic as an excuse to increase arbitrary powers.

Inconsistent messaging on vaccines — repeated statements from Trudeau, premiers and public health officials that “the best vaccine for you to take is the very first one offered to you,” followed by the National Advisory Committee on Immunization declaring that no, actually Pfizer and Moderna were preferred to AstraZeneca — obviously contributed to vaccine hesitancy.

Ditto the Trudeau government’s original plan to concoct a deal with China to provide vaccines to Canada — when Canadians had good reasons to be suspicious of China’s actions throughout the pandemic on a number of fronts — undoubtedly fuelled the vaccine hesitant’s distrust of government.