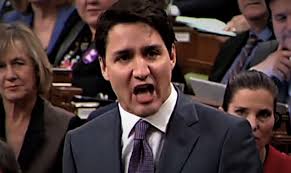 All societies have the potential to fall into a dangerous pattern of seeking scapegoats and directing hate towards those who the government targets. Canadians should not think we are immune to that.

But in case you haven’t, or for a refresher, here it is:

Here we have all the components of the kind of rhetoric that proved so destructive in the 20th century:

Pinning blame on that group.

Directing anger away from the government and onto the targeted group.

Dividing ‘those people’ from the rest of the population.

‘Hinting’ that ‘those people’ don’t need to be tolerated, implying they can be ‘dealt with’ in some way.

It’s the kind of rhetoric that the leaders of both fascist Germany and the communist Soviet Union indulged in on a regular basis, both with horrific consequences.

In fact, both fascist Germany and the Soviet Union can be thought of as ‘Scapegoat States,’ in that their defining ideological principle was built around blaming specific groups for all the problems of society, and promising that everything would be better if those groups were dealt with by the majority of the populace.

And, given Justin Trudeau’s past praise of Communist China (a nation currently throwing minorities into concentration camps), and given Pierre Elliot Trudeau’s affinity for Communist Dictators – an affinity he clearly passed on to his son – it should be no surprise that Justin Trudeau is indulging in that kind of rhetoric.