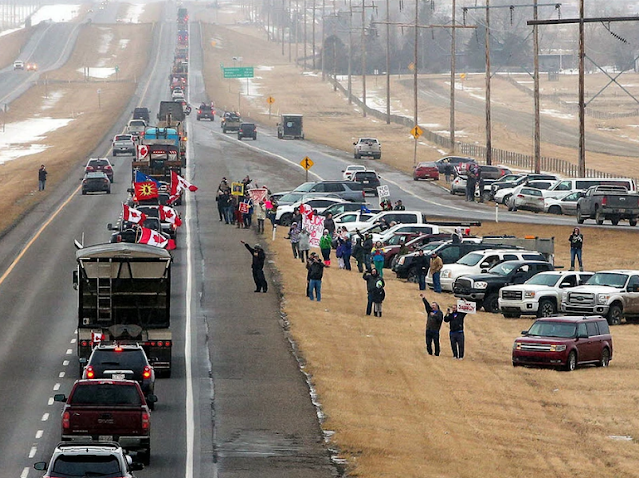 https://winnipegsun.com/news/local-news/warmington-freedom-truckers-may-form-worlds-longest-convoy/wcm/1367da57-f830-4645-afc2-b21555347681
According to Guinness World Records, the longest truck convoy ever recorded was 7.5 km long, in Egypt in 2020.
The Freedom Convoy heading from British Columbia to Ottawa is said to be considerably longer.

“It’s 70 km long,” said Benjamin Dichter, spokesman for the Freedom Convoy 2022. “I have seen footage from an airplane. It’s impressive.”

By Wednesday, truckers hope to have taken their protest through to Manitoba and will make it to southern Ontario on Friday.

Plans call for the convoy to arrive in Ottawa on Saturday for a protest.

If it gets there on time — and if the convoy holds together as it has in British Columbia, Alberta and Saskatchewan — it could be 10 times larger than the world record.

here are estimates the Canadian convoy could comprise 50,000 trucks from the West, East, and even from the United States. It’s difficult to speculate what will transpire in the days ahead.

It looks like Ottawa could be swamped with long-haul trucks on Jan. 29. But with winter weather and potential issues, including possible roadblocks or traffic snarls, time will tell.

Whatever happens, it won’t be for lack of support.

Thousands of Canadians have lined the route, cheered from overpasses and offered to feed drivers in their homes and restaurants.

It’s a grassroots demonstration that has become far bigger than anything organizers had envisioned.