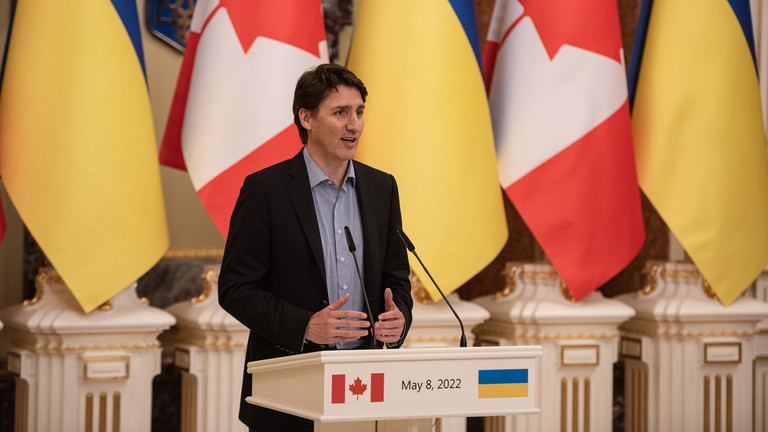 Canadian Prime Minister Justin Trudeau made a surprise visit to Kiev this week. Given that the threat level in the city has been reduced to the point where U2’s Bono can now play an impromptu concert, the real surprise is that Trudeau was photographed without his face mask, which has been nearly omnipresent when he’s on Canadian soil.

Trudeau’s mask-wearing serves mainly as propaganda in an ongoing attempt to justify his vaccine mandates to Canadians. Required for citizens to board an airplane or train within their own country, the mandates effectively keep many stuck at home and unable to travel, but also can prevent them from working, as being fully jabbed is a condition of employment in some cases.

While almost 82% of Canadians are double-jabbed, only 35% of Ukrainians had received two doses of an anti-Covid vaccine around the time the conflict broke out on February 24, according to Time Magazine. And yet Trudeau was traipsing around Kiev mask-free in a recent conflict zone while he insisted on hiding from Canadian truckers and their Freedom Convoy supporters when they convened on Ottawa’s Parliament Hill earlier this year.

Instead of engaging in dialogue to find some sort of compromise with the protesters seeking an end to Covid-related mandates, Trudeau invoked the Emergencies Act, which hadn’t been used in Canada since Quebec separatism sparked terrorist attacks in 1970. The measure caused personal bank accounts to be blocked based on association with – and donation to – the cause.

Much like mask propaganda apparently doesn’t matter anymore when you’re not trying to scare people into submission, democracy also only seems to matter when the Western establishment is trying to justify involving itself in another faraway foreign conflict.

Speaking at a press conference with Ukrainian President Volodymyr Zelensky, Trudeau announced a further donation of weapons to Ukraine, including $1 million in small arms and ammunition.

The Canadian prime minister has failed to heed the warnings of experts that the country’s weapons could end up in the hands of militia groups or stolen and sold on the black market, according to state-backed CBC.

Trudeau also vowed in Kiev to “fight disinformation.” Nothing says “democracy” quite like crackdowns on freedom of inconvenient information out of step with Western government narratives. Under Trudeau, the Canadian military has already been deployed to shape public opinion amid the Covid-19 crisis by using propaganda techniques derived from military psychological operations in Afghanistan. And now his government is trying to further impose government control over free speech with an “Online Streaming Act.” Trudeau has no business uttering the word “democracy” when he has actively violated so many basic tenets of it.

And speaking of irony, the fact that Trudeau chose to visit Kiev on May 9th – the anniversary of the World War II defeat of Nazi Germany – was apparently also lost on him. His government has overseen the training and equipping of actual neo-Nazis in Ukraine to fight a proxy war against the nation (Russia) which lost the most people fighting the Nazis in World War II as a member of the British- and American-allied Soviet Union.

Jewish advocacy groups, and a Nazi hunter are among those demanding answers for Canada’s Joint Task Force Ukraine’s training of Ukrainian neo-Nazis, including those of the Azov Battalion, which is now integrated into the Ukrainian Army. It has emerged that Canadian officials were more concerned about being seen by the public to be coaching neo-Nazis, in the event that the information ever got out, than they were with the actual training of them.

Given that Trudeau’s government has overseen the military education of actual neo-Nazis in Ukraine, one would think he would have picked a different day to visit Kiev than the anniversary of the defeat of that ideology.

Tone-deaf Trudeau’s trip strongly suggests that instead of peddling his utopian vision for democracy in Ukraine, he might want to start with first trying to adhere to and uphold his own lofty values and standards at home rather than doing everything that he seemingly can to erode them.