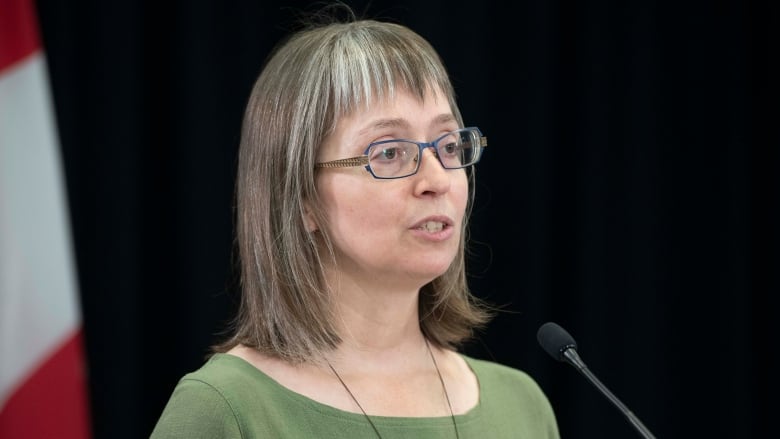 Chief medical officer of health received nearly $228K in addition to her $363K salary.
Alberta's chief medical officer of health last year received the largest cash benefit payout of any provincial civil servant since the government began posting records in 2016.
Dr. Deena Hinshaw's salary last year was $363,634, but she also took home an additional $227,911 in "cash benefits" during the 2021 calendar year, according to the Alberta government's salary and severance disclosure database, which was updated last month.
Hinshaw is one of 107 employees in management positions who received extra pay for their efforts during the COVID-19 pandemic, the provincial government says. The total extra compensation cost Albertans more than $2.4 million.
"The scale of the response to this unprecedented public health emergency required an extraordinary amount of additional work from the Office of the Chief Medical Officer, the Vaccine Task force, the Pandemic Response Team and others, which is reflected in the recent disclosure," Ministry of Health spokesperson Mark Feldbusch said in an email last week.
He said it is a long-standing policy on pay that has been in place during other emergencies, including the Fort McMurray wildfires in 2016 and southern Alberta floods of 2013.
Hinshaw's contract, which is posted online, does not specify the number of hours in her work week, nor does it include overtime provisions.
The Alberta government's extra pay to Hinshaw covers time she worked in excess of 45 hours per week. It was calculated using a formula devised by the public service commission, Feldbusch said.
He declined to say how many hours of overtime she worked.
https://www.cbc.ca/news/canada/edmonton/alberta-hinshaw-pay-bonus-2021-1.6536845