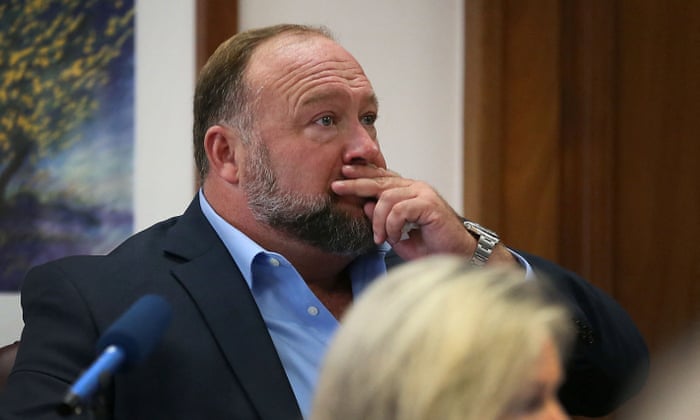 Attorneys for the conspiracy theorist Alex Jones “messed up” and sent to his legal adversaries “every text message” he had written in the past two years – contradicting claims Jones had nothing on his phone pertaining to the deadly Sandy Hook school shooting, which he long maintained was a hoax, it was revealed at his defamation trial on Wednesday.

Sandy Hook review: anatomy of an American tragedy – and the obscenity of social media

The revelation surfaced during an exchange in an Austin, Texas, courtroom between Jones and Mark Bankston, a lawyer representing the parents of a six-year-old boy killed in the 2012 attack.

For years, Jones, a bombastic far-right provocateur, ranted to his millions of followers that the 2012 Sandy Hook elementary school shooting was a hoax, that children were not killed and that parents were “crisis actors” in an elaborate ruse to force gun control. The parents of six-year-old Jesse Lewis are seeking at least $150m (£123m) in a defamation trial brought against the prominent radio host.

Bankston provided to the Infowars host a copy of a text message he received that criticized his platform’s coverage in 2020 of coronavirus and likened it to his false theory that the Sandy Hook killings were fake. This was deeply unfavorable to Jones because he had provided sworn testimony at a deposition that he had no text messages on his phone that referenced the Sandy Hook massacre.

“You did get my text messages?” Jones asked Bankston, while on the witness stand. Chuckling sarcastically, Jones added: “You said you didn’t. Nice trick.”

Bankston replied: “Do you know where I got this? Your attorneys messed up and sent me a digital copy of your entire cellphone, with every text message you’ve sent for the past two years.”

Bankston said he told Jones’s lawyers about the mistake, but they did not take “any steps” to label the texts as privileged, and thereby keep them out of court.

“That is how I know you lied when you said you didn’t have text messages about Sandy Hook,” said Bankston, whose clients are Neil Heslin and Scarlett Lewis, the father and mother of Jesse Lewis, who died in the shooting.

Jones tried to parry by saying he would not have turned his phone over to the attorneys who then inadvertently forwarded the texts to Bankston if he was trying to hide anything.

Jones mockingly told Bankston he now had his “Perry Mason moment”, referring to the fictional TV attorney who often won cases by getting those he was questioning to confess to wrongdoing on the witness stand.

“You know what perjury is, right?” Bankston said, referring to the crime of lying under oath. “I just want to make sure before we go further.”

Jones said he did but maintained he did not try to hide anything on his phone.

Shortly after the engrossing exchange, Rolling Stone reported that the congressional committee investigating the January 6 attack on the US Capitol by supporters of the former president Donald Trump would subpoena Jones’s texts.

The outlet reported committee members were trying to learn more about any contacts that Jones – the far-right provocateur that he is – may have had with Trump’s team before the riot at the Capitol.