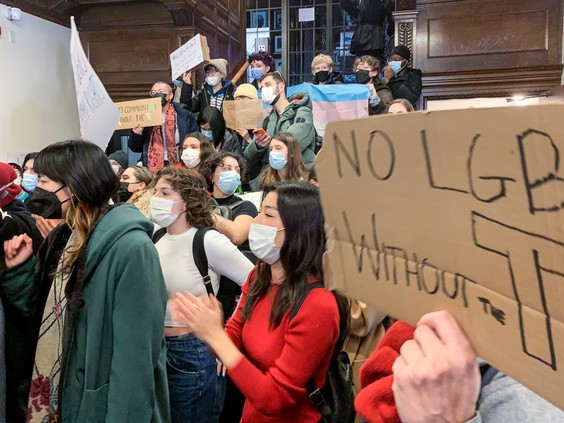 Lawyer Robert Wintemute wanted to host a "debate" about separating trans rights from the rights of lesbians, gays and bisexuals.

A protest involving more than 100 transgender rights advocates led to the cancellation of an event at McGill University on Tuesday.

The event, called “The Sex vs. Gender (Identity) Debate In the United Kingdom and the Divorce of LGB from T,” was hosted by the Faculty of Law’s Centre for Human Rights and Legal Pluralism. The speaker, Robert Wintemute, is a professor of human rights law at King’s College London with ties to LGB Alliance, an advocacy group described by various LGBTQ2+ organizations and activists as a transphobic hate group.

The event was cancelled partway through after protesters entered the venue and threw baking flour at Wintemute, CTV News reported. They also unplugged a projector he used for the event. Wintemute told CTV News that Canadian universities should be shocked by the protest, which he called “extremely anti-democratic.”